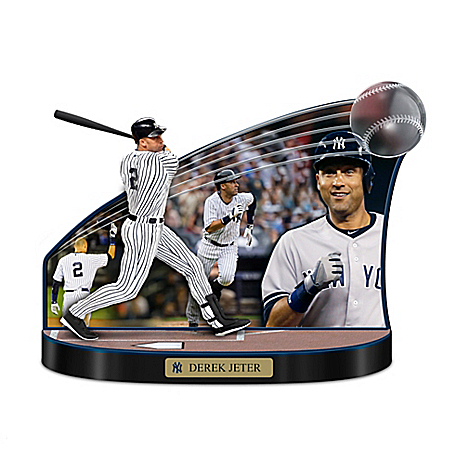 $89.97 Caught In The Action New York Yankees Derek Jeter MLB Sculpture Featuring A 3D Frosted Crystalline Baseball That Appears To Soar Into The Outfield – From 1995 until 2014, Derek Jeter helped lead the New York Yankees™ to five World Series™ titles and created a winning dynasty that he captained for 12 seasons. Known as “Mr. November,” he continues to be considered one of the best players in the history of Major League Baseball™, and he remains the only player in team history to play his entire career with the New York Yankees. Now, you can pay tribute to “Captain Clutch” with this Caught In The Action Derek Jeter Sculpture, a limited-edition MLB™ collectible available from The Hamilton Collection.Officially licensed by Major League Baseball, this tribute sculpture is masterfully handcrafted with a fully sculpted figure of Derek Jeter hitting another game-winning home run. The crystalline backdrop features 2D archival images of Derek Jeter on the field as well as a 3D frosted crystalline baseball that appears as if it’s soaring into the outfield. His name and accomplishments will be forever remembered with the Derek Jeter nameplate along the base and his iconic career statistics, facts and awards featured on the back. This MLB collectible sculpture makes a terrific gift for fans of New York Yankees decor. Strong demand is expected for our Derek Jeter memorabilia and it also makes a Yankees™ gift, so don’t strike out; order now!