Forever With You Candleholder
With God, All Things Are Possible Women’s Religious Front-Zip Hoodie 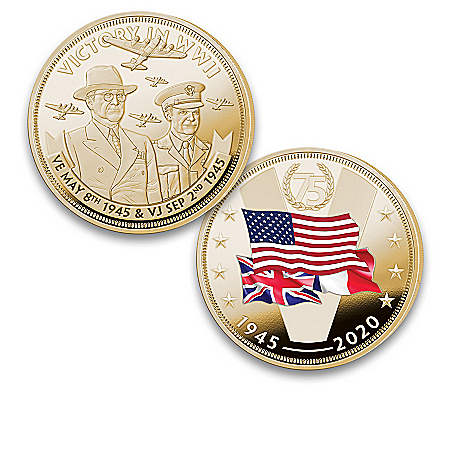 $39.99 The World War II Victory 75th Anniversary 24K Gold-Plated Proof Coin Collection – After a long four years of war and sacrifice in World War II, the Allies were finally victorious. It was a time for the Greatest Generation to rejoice and reflect on the gains and losses of the war, and the bright future of freedom that lay ahead. Now, remember all those who secured the liberties we enjoy today with this World War II Victory 75th Anniversary Proof Coin Collection, exclusively from The Bradford Exchange Mint. This historic collection begins with Issue One, The World War II Victory 75th Anniversary. Next to arrive will be Issue Two, Display Box and Italian Armistice. Soon your collection will continue with Issue Three, Iwo Jima, and additional collectible Proof coins, including coins honoring the sacrifices of other Allied Nations such as U.S.S.R., Canada and Australia, each a separate issue to follow.‡Intended as collector’s items, each of the gleaming commemorative coins in this collection is plated in 24K gold and offered in coveted Proof condition. The reverse sides feature original and dramatic World War II imagery and dates of key Allied victories, while the obverse sides salute the Allied nations, showing off the flags of the United States, Great Britain and France in full color. A special 75th Anniversary privy mark appears above the flags, while the dates of the anniversary appear below. Each coin is preserved in a crystal-clear capsule, ready to be shown off in the handsome Display Box – and what an impressive patriotic gift this collection makes! Strong demand is anticipated, so don’t delay. Order now!

Forever With You Candleholder
With God, All Things Are Possible Women’s Religious Front-Zip Hoodie