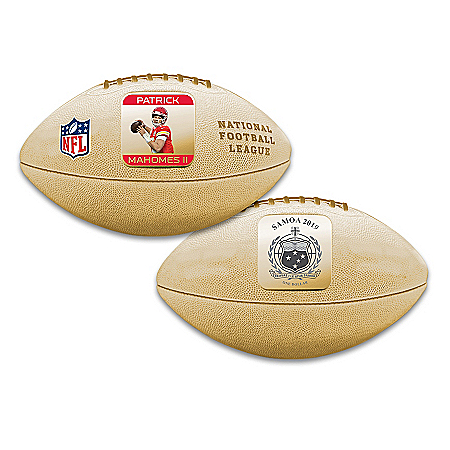 $199 First-Ever Patrick Mahomes II 24K Gold-Plated 3D Football-Shaped Legal Tender NFL Coin – Out of the gate, Patrick Mahomes II has already established himself as one of the league’s most exciting and dynamic players being named NFL MVP in his first season as a starter. Now you can pay tribute to his amazing performances with the First-Ever Patrick Mahomes II 3D NFL Coin, available only from The Bradford Exchange Mint. Officially licensed by NFL Properties LLC and NFL PLAYERS, this is the world’s first 3D football coin to honor this young player, which makes it a must-have memorabilia for fans. But it is only issued in a strict limited edition of 999 worldwide so you must hurry to score yours!Richly plated in 24K gold for enduring value, this impressive collectible coin gets its fully dimensional football design from specially prepared, Proof-finished coining dies. It even features a distinctive “pigskin” texture and lacing, just like a real football! The reverse side of the coin showcases an action photo of Patrick Mahomes II in full color, the official NFL logo and the words “NATIONAL FOOTBALL LEAGUE”, while the obverse bears the coat of arms and official seal of the issuing government, Samoa, and the one-dollar denomination. Arriving secured in a crystal-clear capsule for heirloom preservation, your legal tender Patrick Mahomes II 3D coin also includes a custom presentation holder with an official NFL hologram. Strong demand is expected for this limited-edition 3D NFL collectible coin, so DON’T WAIT. Order now!