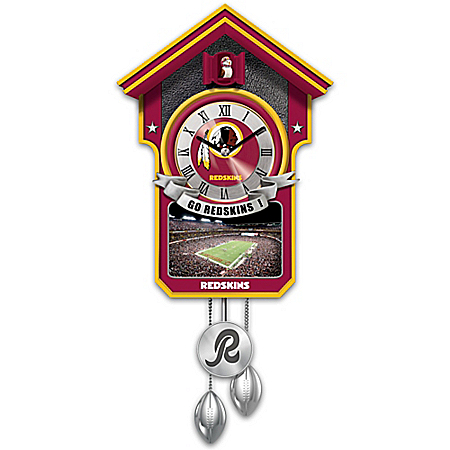 $199.95 The Washington Redskins have proven to be a powerhouse in the NFL. They are 1 of only 5 franchises to record over 600 regular season and postseason wins, and with 3 Super Bowl victories under their belt, there is plenty worth celebrating. Now, this Washington Redskins Cuckoo Clock shows off your team spirit any time of day. Officially licensed by NFL Properties LLC and available only from The Bradford Exchange, this impressive NFL cuckoo clock is the perfect way to honor one of the most valuable teams in the NFL.Featuring a carefully handcrafted clock body, this Washington Redskins decorative cuckoo clock is hand-painted with red and silver details. A stunning, full-color image of the Redskins’ playing field showcases a packed stadium, highlighted by the team name just below. The clock and swinging pendulum with the official Redskins logo are driven by a precise quartz movement, while decorative football weights add another winning touch. At the top of every hour, a traditional cuckoo bird wearing a Redskins helmet comes out of the miniature doors at the top of the clock to chirp in each hour, accompanied by the sound of a roaring crowd. For any Redskins football fan, this wall clock is a must-have statement of team pride, but the edition is limited to just 10,000 worldwide. Strong demand is expected, so don’t wait. Order now!