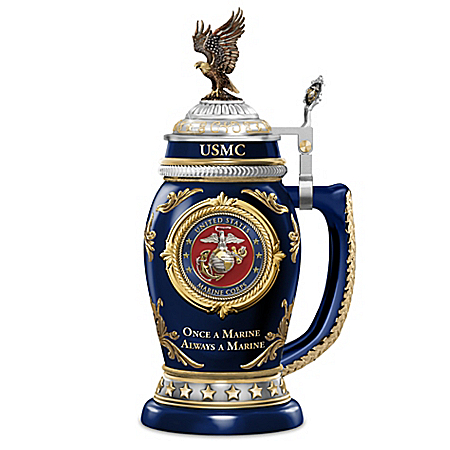 $129.99 Even before America was founded, there were Marines fighting for its future. Now, you can honor the Few and the Proud with the USMC VALUES Stein, available in a limited editon exclusively from The Bradford Exchange. Crafted of triple-fired Heirloom Porcelain?, this handsome stein is filled with design elements that mark it as uniquely Marine, making it an exceptional U.S. Marine Corps collectible!The centerpiece of this Heirloom Porcelain? stein is a sculpted medallion that’s embellished with 22K gold and hand-set on the front. It dramatically showcases the Eagle, Globe and Anchor while the words to the “Marine?s Hymn” are emblazoned in golden lettering on the back. A zinc alloy topper with an eagle adorned in the stars and stripes completes the top. A second Eagle, Globe and Anchor emblem can be found on the thumb rest. The handle is embellished with golden braiding to complete this stately 32-ounce drink-safe masterpiece. Strong demand is expected, so order now!