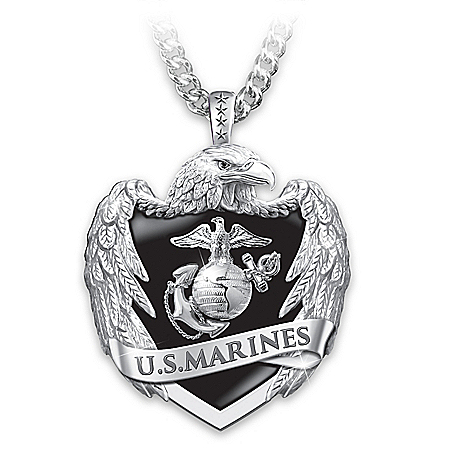 $99.99 Since the Marines were first founded during our nation’s Revolutionary War in 1775 to today, those who have worn the uniform of the United States Marine Corps have always remained steadfast in their dedication to the Corps’ values of Honor, Courage and Commitment. Now, a proud emblem of this country’s elite force – the United States Marine Corps – is captured in an impressive pendant paying tribute to the enduring legacy and tradition of the Marines. Introducing the USMC Eagle Shield Pendant Necklace, a fine jewelry design exclusively from The Bradford Exchange.Crafted in Marine-tough solid stainless steel, this powerful jewelry design features a magnificently sculpted eagle, representing American freedom, embracing a shield of protection. Standing out against the shield’s bold black enameling is a U.S. Marine Corps emblem of eagle, globe and anchor. Adding to this distinctive solid stainless steel pendant, a banner on the front is inscribed with “U.S. MARINES”, while the reverse side is inscribed with the Marine Corps motto “SEMPER FIDELIS” (Always Faithful), and the matching 24″ stainless steel chain hangs from a bail with four engraved stars representing the four divisions of the United States Marine Corps. Strong demand is expected for this USMC jewelry, so don’t delay. Order now!