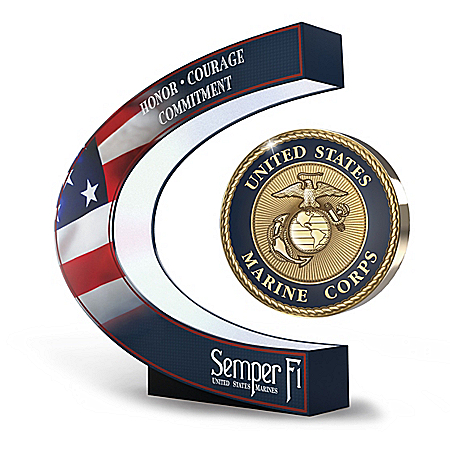 $99.99 USMC: A Tribute To Excellence Levitating Illuminated Medallion Sculpture – Motivated by a passion for excellence, the highly trained U.S. Marines have protected our nation and our freedoms for over 200 years. Now, you can display an honorable tribute to these brave Marines with the USMC: A Tribute to Excellence Levitating Medallion Sculpture, exclusively from The Bradford Exchange. This limited-edition sculpture features an intricately detailed USMC medallion that floats and spins in mid-air, powered by hidden electro magnets that suspend it within the custom base.The intricately detailed medallion commands your attention with precision crafting and innovative levitation technology. The raised-relief sculpted Eagle, Globe and Anchor is featured on both sides of the medallion so you can treasure its beauty as it spins around and around. Rich golden plating adds shining highlights, while the specially shaped base is decorated with a vivid image of the stars and stripes, the Semper Fi motto and the USMC core values of Honor, Courage, and Commitment. Plus, the base lights up to illuminate the USMC medallion. This levitating sculpture is the perfect addition to your own USMC home decor, and it also makes a great patriotic gift. Strong demand is expected, so don’t wait. Order now!