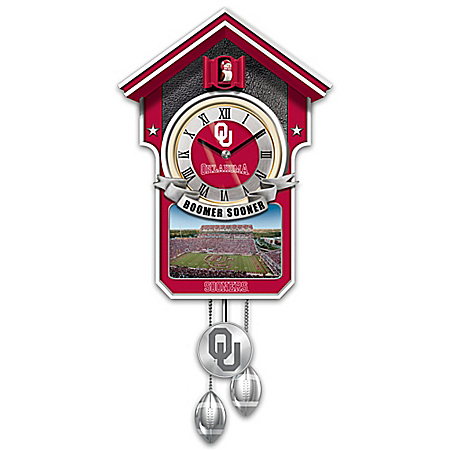 $199.95 It’s no wonder Sooners® fans are so eager to cheer on the team, and this Oklahoma Sooners® cuckoo clock gives the team a shout out every hour, on the hour! Introducing the University of Oklahoma Cuckoo Clock, a Bradford Exchange exclusive that offers the perfect tribute to the Sooners’ impressive 7 national championships, 16 consecutive Bowl Appearances, and the longest winning streak (47 straight) in Division 1 college football history. But be aware, this custom-designed cuckoo clock is available in a strictly limited edition of just 10,000 worldwide!Officially licensed by the University of Oklahoma, this handsome Cuckoo Clock is perfect for any University of Oklahoma college football fan. It outshines other wall clocks in so many ways, from its expertly handcrafted clock body to its hand-painted finish in the team’s crimson and cream colors and white detailing. The Sooners logo graces the clock face, enhanced by a full-color image of the field on game day and a banner boasting “BOOMER SOONERS®.” Driven by a precise quartz movement, it also features decorative football-shaped weights and a swinging pendulum adorned with the official OU® logo. Best of all, at the top of every hour, a cuckoo bird sporting a Sooners helmet pops out of the miniature doors at the top, chirping with Sooners pride! This winning wall clock is certain to top any list of Oklahoma Sooners fan gifts, and intense demand is expected. So don’t delay. Order now!