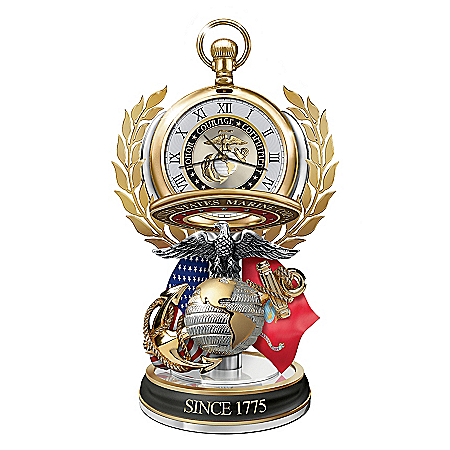 $199.99 The United States Marine Corps has a long and proud tradition dating back to 1775, and now you can show off a timeless tribute to the USMC with this spectacular commemorative pocket watch. Boasting an exclusive fine jewelry design from The Bradford Exchange, it is the perfect way to honor those who have given so much, from the Revolutionary War and World Wars I and II to the wars in Iraq, Afghanistan and elsewhere. In addition, your watch arrives with a magnificent custom display stand showcasing a sculptural Marine Corps Eagle Globe and Anchor emblem in silver and gold tones, a gold-tone laurel that surrounds your watch, the USMC and American flags, and the inscription SINCE 1775. You’ll even receive a FREE set of historical fact cards tracing 240 years of USMC history and featuring compelling art including the flag raising at Iwo Jima. Importantly, this extraordinary presentation is available in a strictly limited edition of just 5,000.This classically styled U.S. Marines pocket watch boasts a precision quartz movement on the inside and gleams with rich, durable gold-tone ion-plating on the outside. The unique see-through cover is spring activated and boldly displays the words UNITED STATES MARINE CORPS and their motto SEMPER FIDELIS (always faithful). A circle of 12 stars set against a field of deep red serves as hour markers as well, allowing you to tell the time without opening the cover. But you’ll want to open it and see everything, from the Marine Corps values of HONOR, COURAGE and COMMITMENT and an array of stars surrounding the proud USMC emblem, as well as classic Roman numeral and hour markers. The case back is etched with the USMC emblem and the words SINCE 1775, as well as MARINES THE FEW. THE PROUD; it also records for posterity your personal watch number in the edition of 5,000. A traditional pocket watch chain and clip are also included. This impressive USMC commemorative pocket watch is the perfect way to show your pride in America’s courageous mil