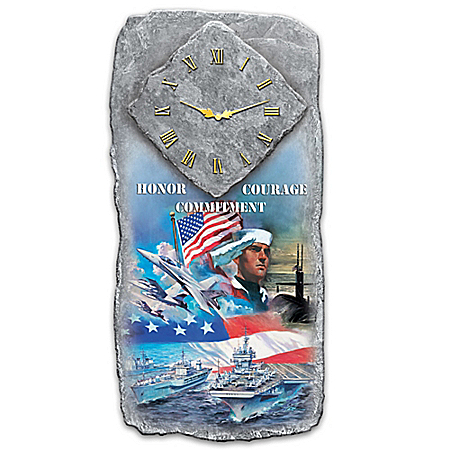 Everyone who serves in the United States Armed Forces swears the same oath to uphold the Constitution and defend our nation. But United States Sailors have additional words they live by – Honor, Courage and Commitment – the Navy’s Core Values. Now, you can honor the brave heroes of the U.S. Navy any time of the day with the Honor, Courage and Commitment Wall Clock, a limited edition exclusively from The Bradford Exchange.Crafted of durable artist’s resin to recreate the handsome look of a genuine slab of slate, this striking wall clock showcases the dynamic artwork of the Navy in action by historical artist, Dennis Lyall, along with the words of the Navy’s Core Values. A second slate-look slab creates the raised clock face and is adorned with traditional Roman numerals and hour and minute hands. A precision quartz movement helps ensure perfect timekeeping for years to come. Strong demand is expected. So don’t waste a moment without this impressive U.S. wall clock; order now!