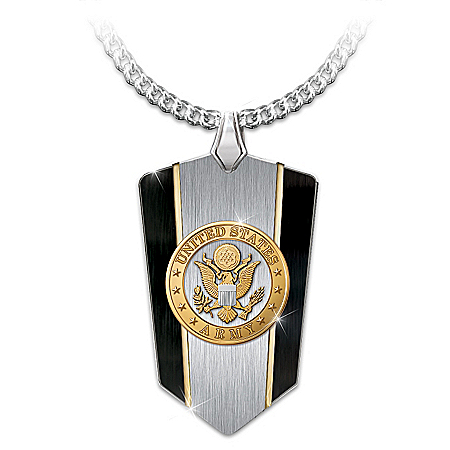 Each and every day since the U.S. Army was first formed in 1775 during the American Revolutionary War, those who wear the Army uniform have put their lives on the line to defend our country and protect the principles on which this nation was founded. Now, the proud emblem of our nation’s largest and oldest military branch is captured in the U.S. Army Shield Pendant Necklace, a fine jewelry design exclusively from The Bradford Exchange. Officially licensed by the U.S. Army, this handsome Army pendant is magnificently custom crafted in soldier-tough solid, brushed stainless steel in a shield-shaped design – long a symbol of protection. Standing out at the center of the shield in raised relief and ion-plated in 24K gold is a traditional U.S. Army emblem with its powerful symbolism of a bald eagle holding in its talons 13 arrows on one side and an olive branch on the other side, representing its capacity to wage war and bring peace. Also included is our original flag with 13 stars and stripes representing the 13 colonies. A banner with the words “E PLURIBUS UNUM” is encircled by a series of stars and “UNITED STATES ARMY”. Inscribed on the reverse side is the current U.S. Army emblem and the motto: “THIS WE’LL DEFEND”. A matching 24-inch stainless steel chain with a lobster clasp completes the distinctive look of this U.S. Army necklace that honors the proud tradition upheld over the centuries. Your Army shield necklace arrives in a velvet jewelry pouch and custom box, perfect for safekeeping and gift giving. Strong demand is expected for this distinctive tribute to the legacy of the United States Army and those who continue to answer the call. So order now! $79.99 USD