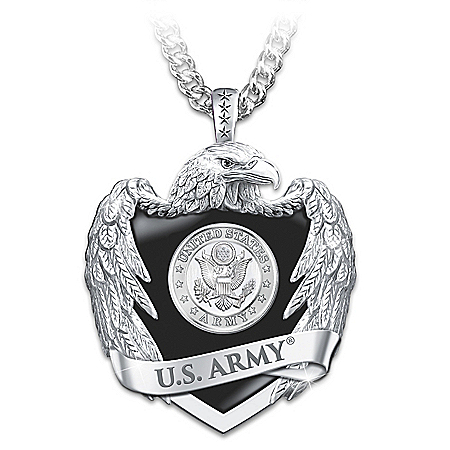 $99.99 Ever since the U.S. Army was first formed in 1775 during America’s Revolutionary War, those who wear the Army uniform have honored the creed “This We’ll Defend,” putting their lives on the line to protect our country’s freedom and the principles on which they were founded. Now, you can wear a proud emblem of our country’s largest and oldest of the military services with the U.S. Army Eagle Shield Pendant Necklace, an officially licensed fine jewelry exclusive from The Bradford Exchange. This striking Army jewelry design features a soldier-tough, solid stainless steel pendant featuring a magnificently sculpted eagle embracing a shield of protection.Standing out against the shield’s bold black enameling is a traditional U.S. Army emblem with its meaningful symbolism, including: an eagle holding 13 arrows and an olive branch (representing the capacity to wage war and bring peace),13 stars and 13 stripes (representing the original 13 colonies), and, encircling it all, “UNITED STATES ARMY” and more stars. Adding to this distinctive statement piece is a banner at the bottom inscribed with “U.S. ARMY”. The reverse side of the pendant is inscribed with the Army motto “THIS WE’LL DEFEND”. Completing this handsome tribute are four engraved stars on the bail that hangs from the matching 24-inch stainless steel chain. Strong demand is expected. Order now!