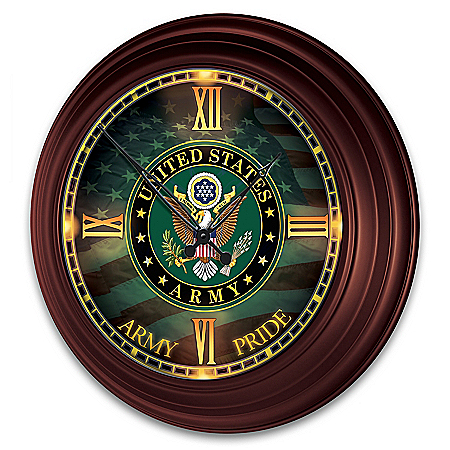 $145 U.S. Army Outdoor Illuminated Atomic Wall Clock Featuring A Glass-Encased Face With Roman Numerals & The U.S. Army Logo – The time is always right to show your pride for one of the finest fighting forces in the world. Innovation meets patriotic timekeeping with this completely self-setting atomic clock dedicated to our courageous Soldiers. Introducing the U.S. Army® Wall Clock, a first-ever U.S. Army atomic clock available only from The Bradford Exchange. Officially licensed by the United States Army, this limited-edition clock commands attention with its impressive self-setting accuracy; the indoor/outdoor clock stays in sync via radio waves with the official source of U.S. time in Fort Collins, Colorado. No need to adjust the time ever again – even when Daylight Saving sets our clocks back and forward.Measuring over a foot in diameter, this striking timepiece proudly displays an intricately detailed U.S. Army logo front and center on the clock face against a billowing image of the symbolic Stars and Stripes. Four large Roman numerals boldly stand out alongside the spirited phrase, “ARMY PRIDE”. A built-in sensor detects darkness and activates hidden LED lights to automatically illuminate the glass-encased face as conditions darken. While you can easily display this handsome clock indoors on any wall, the clock’s housing is crafted of weather-resistant copper-toned metal so you can hang it among your outdoor decor. It also makes a unique U.S. Army gift for veterans and patriotic supporters of our armed forces. Strong demand is expected, so don’t miss out. Order now!