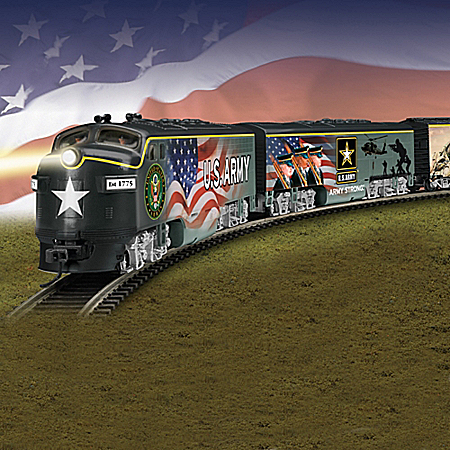 $89.99 For over 200 years the U.S. Army® has stayed strong, Army Strong®, guided by their core values of honor, integrity, loyalty and personal courage. Now, in honor of the brave men and women who serve, and have served, we are proud to present the first-ever U.S. Army Express Train Collection, officially licensed by the U.S. Army and available exclusively from The Bradford Exchange, Hawthorne Village Division. This heirloom-quality tribute begins with Issue One, U.S. Army Diesel Locomotive. Next to arrive will be Issue Two, the Army Strong Engine with FREE 14-Piece Track Set, Power Pack and Speed Controller. Soon your collection will continue with Issue Three, This We’ll Defend Box Car, and additional U.S. Army train cars, each a separate issue to follow.‡Each HO-scale U.S. Army train car in the collection is superbly crafted, authentically detailed, and powerfully decorated. From the locomotive’s shining headlight to the Department of Army Emblem emblazoned on the engine, the powerful and stirring images of our soldiers in action, and the slogans from which they draw strength, you’re sure to find this fine illuminated train set to be a worthy tribute. Precision engineered with a solid metal chassis and steel alloy wheels, your U.S. Army Express Train Collection will bring you years of enjoyment and heartfelt pride. Strong demand is expected. Don’t wait, order now!