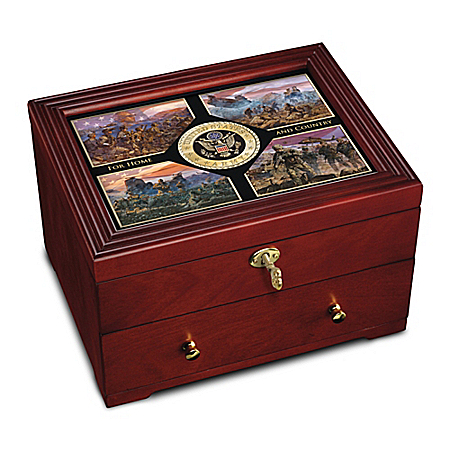 $119.99 The United States Army is made up of the most dedicated and respected soldiers in the world. Always prepared to defend our nation in times of need, the U.S. Army’s first duty is to protect the American people from aggressors with an unstoppable force of highly skilled and dedicated soldiers. Now, you can honor this brave fighting force with the U.S. Army: Defenders of Freedom Keepsake Box, a limited edition Collectibles Market First exclusively from The Bradford Exchange. This distinctive, chest-type wooden strongbox is officially licensed and custom-crafted to recall the rugged military-issued strongboxes dating back to the Civil War. An artwork montage of courageous U.S. soldiers in action by esteemed military artist James Dietz is showcased on the hinged lid of the strongbox along with the iconic Army seal – all under clear, sparkling glass.Helicopters, weaponry and hints of Old Glory are but a few of the dramatic elements that pay tribute to the legacy of the U.S. Army. Flanking the Army seal are the words “FOR HOME AND COUNTRY”. Brass-finished hardware includes two knobs and a functional lock and key to keep valuables secure and out of sight. The compartmented tray under the lid is designed to organize belongings, while the bottom, slide-out drawer offers space that’s perfect for keeping important documents at your fingertips. A black felt lining and warm cherry exterior finish add to the rich look of this handsome and fully functional men’s strongbox. Strong demand is expected. So don’t delay, order now!