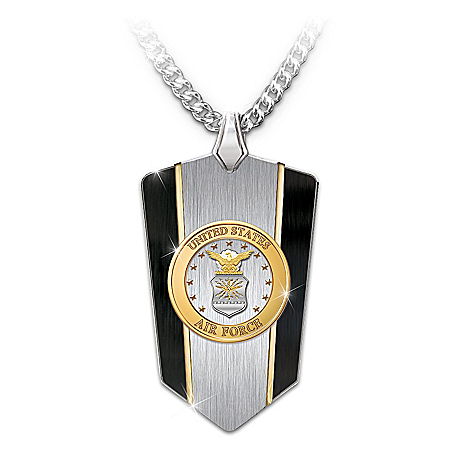 $79.99 The United States Air Force has a long and proud tradition. From the earliest days of the Air Force to today, those who wear the Air Force uniform have made the ultimate sacrifice, putting their life on the line to defend our country and protect the principles on which America was founded. Now, honor the brave men and women of the Air Force with the U.S. Air Force Pendant Necklace, a fine jewelry design exclusively from The Bradford Exchange. This impressive shield necklace pays tribute to the enduring legacy and tradition of the Air Force!Magnificently custom crafted, this stainless steel Air Force necklace features a shield-shape design, the symbol of protection, enhanced with ion plating in 24K gold and rich black. Standing out in raised relief at the center of the shield is a traditional U.S. Air Force emblem, with its powerful symbolism, including a crest at the center with a majestic bald eagle and lightning bolts symbolizing the strength of our country and our air strike power. The crest is ringed by 13 stars, inspired by our first flag’s 13 stars representing the original 13 colonies. Plus, the words “UNITED STATES AIR FORCE” encircle the emblem while the back of this Air Force pendant is inscribed with the motto “FLY FIGHT WIN.” Strong demand is expected, so order now!