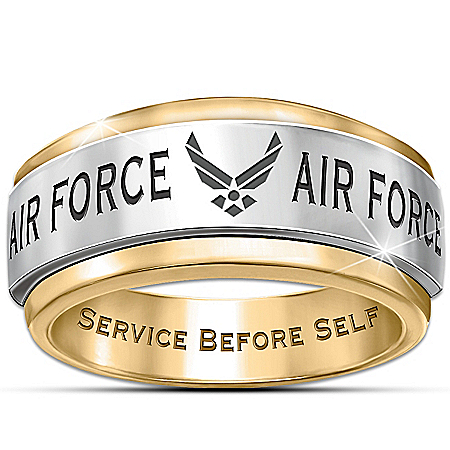 $79.99 The United States Air Force has a long and proud tradition. From the earliest days to today, those who serve in the Air Force have made the ultimate sacrifice, putting country before self. Now, you can show your pride and let the spirit of the United States Air Force soar with the U.S. Air Force Ring, a fine jewelry design exclusively from The Bradford Exchange and officially licensed by the U.S. Air Force. Individually crafted of Air Force-tough solid stainless steel with 24K gold ion-plated accents, this contemporary, military men’s ring features a bold and original design. The center band of the ring is inscribed with “AIR FORCE” and the Air Force winged emblem and, when you turn it, the center band of the ring actually spins! Etched on the inside of the ring is the Air Force motto: “SERVICE BEFORE SELF”. This distinctive U.S. Air Force men’s ring arrives in a presentation case with a meaningful “To Forever Be… A United States Airman” card. It makes a meaningful keepsake for yourself or a special gift for the airman in your life. Strong demand is expected for this distinctive men’s spinning ring. Order now!