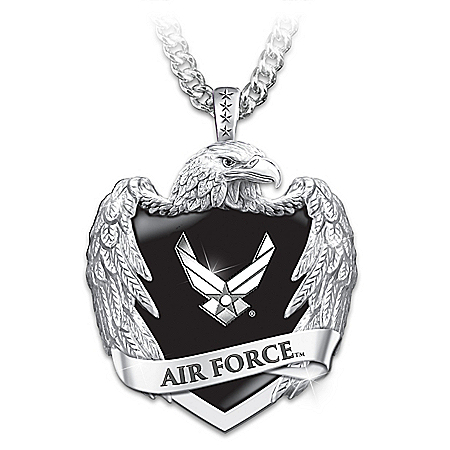 $99.99 From the creation of the Air Force™ as a separate military branch in 1947, America’s Airmen have honored their mission to fly, fight and win. Now, this impressive U.S. Air Force™ Eagle Shield Pendant Necklace pays tribute to the enduring legacy and traditions of those who take to the skies for the sake of our nation and our ideals. A fine jewelry exclusive from The Bradford Exchange, this officially licensed necklace features a handcrafted solid stainless steel pendant with a magnificently sculpted eagle – representing American freedom – embracing a shield of protection.Standing out against the shield’s bold black enameling is the current winged Air Force Symbol, representing both the service’s heritage as well as its future as a leading-edge force in protecting the United States and its interests. A banner on the front is inscribed with “AIR FORCE&#153”, while the reverse side bears the words “FLY FIGHT WIN”. The pendant’s bail bears four engraved stars representing four Air Force units – flight, squadron, group and wing. This fine U.S. Air Force jewelry even arrives in a custom presentation case, ideal for safekeeping and gift-giving. Strong demand is expected, so don’t wait. Order now!