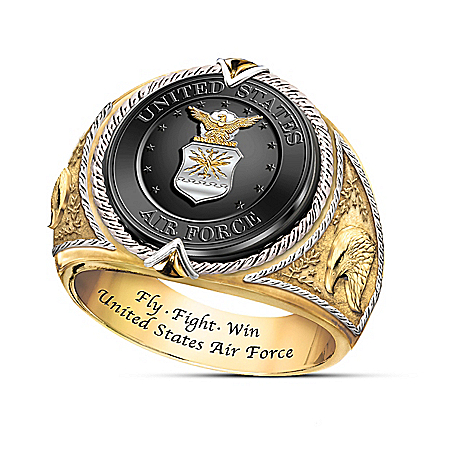 $279.99 Steadfast in their values, those who have worn the uniform of the United States Air Force have dedicated their lives to the noble tradition of serving their country and preserving freedom worldwide. Now, show your allegiance to the Air Force spirit of “Fly, Flight, Win” with the U.S. Air Force Tribute Ring, a fine jewelry design available in a strict limited edition of 5,000, only from The Bradford Exchange. This sterling silver ring honors the Air Force’s core values and strength of character with the richness of silver, gold and onyx.Individually crafted in solid sterling silver with gleaming 18K-gold plating, this handsome ring showcases an Air Force emblem in raised relief, standing out against a custom-cut genuine black onyx center stone. The contrast of silver and gold is continued in the prongs holding the center stone and in the rope border that surrounds the central emblem. A sculpted eagle appears on each side of the ring, representing strength and freedom. For the final touch, this striking Air Force jewelry is engraved inside the band with “Fly, Fight, Win United States Air Force” and arrives in a deluxe wood presentation case that features an engraved plaque. Heavy demand is expected, so hurry. Order now!