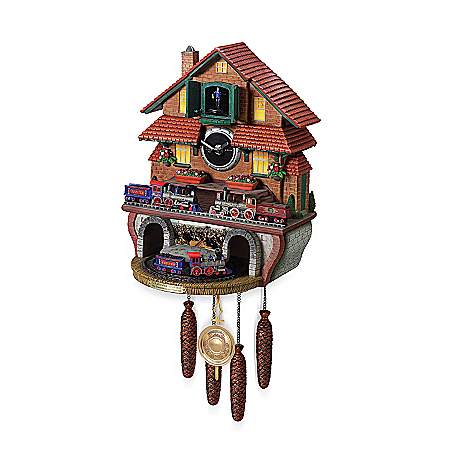 On May 10, 1869, East met West at the completion of the first Transcontinental Railroad across the United States, connecting the Central Pacific and the Union Pacific lines. Now an heirloom-quality train cuckoo clock commemorates this historic event in railroad history. Featuring a real moving train, complete with authentic railroad sounds, the impressive Golden Spike Train Cuckoo Clock is a well-timed addition to your train wall decor that is sure to start a conversation.Only from The Bradford Exchange, this intricately sculpted and hand-painted cuckoo clock captures the spirit of the train station era with each remarkable detail of the clock case. A replica of the famed Jupiter locomotive circles the base every hour, while a conductor cuckoo emerges to the authentic sound of the train whistle. Peak demand is expected for this must-have addition to your train wall decor. History buffs and train collectors take note; your train has come in – order now! $199.95 USD