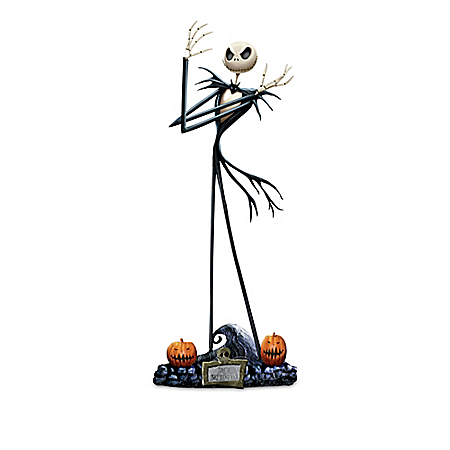 $69.99 Jack Skellington is the undisputed Pumpkin King, the guardian of all the citizens of Halloween Town. Why? Because he has a good head on his shoulders – most of the time! Now, celebrate all the gloriously ghoulish delights of the beloved Disney film “Tim Burton’s The Nightmare Before Christmas” with this spectacular collection of sculptures starring all your favorite characters, plus two interchangeable Jack Heads, FREE with each issue! Available in a first-of-its-kind collection from The Bradford Exchange, Hawthorne Village Division, the frights begin with Issue One, Jack Skellington. Next to arrive will be the lovely Issue Two, Sally. Soon your collection will continue with Issue Three and additional The Nightmare Before Christmas sculptures with FREE Jack Skellington heads, each issue to arrive separately. The magic of Disney and the macabre genius of Tim Burton come to life in each of the Masterpiece Character sculptures in The Nightmare Before Christmas Sculpture Collection. Each is meticulously handcrafted in artist’s resin and hand-painted, with technical details that perfectly capture your favorite characters in three dimensions. At an impressive 12 inches tall, Issue One, Jack Skellington, is reminiscent of the figures originally used to make the landmark film. Plus, Jack’s head is REMOVABLE! Just pop one off and then pop another on to change Jack’s emotions as quickly as your thumping heart desires. You’ll love the way all your The Nightmare Before Christmas sculptures interact; especially as you keep changing Jack’s head! Demand for this collection is expected to be frightfully intense, so hurry! Order now!Fine collectibles. Not intended for children under 14.