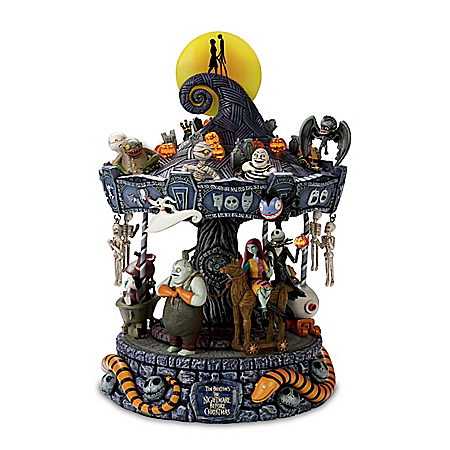 $249.99 Tim Burton’s The Nightmare Before Christmas Musical Carousel: Lights Up – Inspired by a poem Tim Burton had written in 1982 while working at the Walt Disney Animation Studios, Tim Burton’s “The Nightmare Before Christmas” went on in 1993 to become a film classic that captures the hearts and imaginations of millions. Now, the blockbuster film inspires The Nightmare Before Christmas Carousel, an inventive first-ever from The Bradford Exchange that whirls you back to Halloween Town with the turn of a key and a spectacular display of lights, music and motion. Jack Skellington, Sally, Zero, Oogie Boogie, Dr. Finkelstein, the Mayor, Lock, Shock and Barrel – all your favorite characters are here, over twenty in all, hand-sculpted, handcrafted in artist’s resin, and hand-painted in frighteningly fine detail.Anyone who appreciates Disney films or unique collectible treasures is sure to find plenty to admire here, from the luminous moon on Spiral Hill showcasing a silhouette of Jack Skellington and Sally on the front and Oogie Boogie on the back, to the graveyard atop the carousel canopy, to the giant snake that winds its way around the base. Skeletons dangle and witches ride by, surrounded by grimacing jack-o’-lanterns, coffins, ghosts and more. At the flip of the three-way switch you control not just the lights that set the moon, canopy and seven pumpkins aglow, but also the rotating movement of the lighted carousel and the melody of “Overture” that fills the air! But if you want to make your Christmas decor extra magical with this premiere musical carousel, you must hurry. The edition is limited to 295 crafting days and strong demand is expected! Order now!A fine adult collectible, not intended for children.