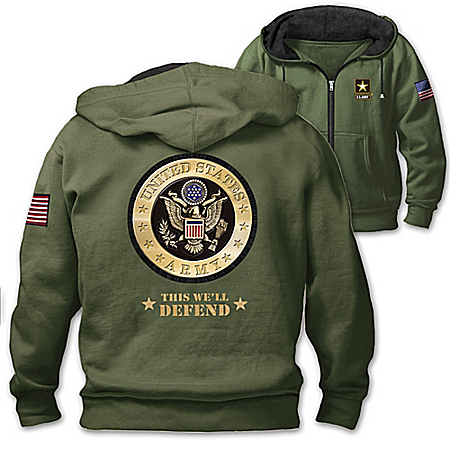 $99.95 The heroes of the United States Army® carry themselves with honor, integrity and courage. Now, show your proud allegiance whenever you wear the This We’ll Defend Men’s Hoodie, a custom-crafted apparel exclusive from The Bradford Exchange. A casual and comfortably stylish tribute, this U.S. Army men’s hoodie is crafted in an easy-care cotton blend knit with kangaroo front pockets, knit cuffs and hem, a full front zipper and silver-toned metal tippets on the hood drawstrings.Sure to command attention, a round applique patch of the official United States Army logo with a black embroidered edge and the embroidered motto “This We’ll Defend” is showcased on the back of this men’s hoodie. A thermal knit-lined hood keeps you extra warm, and this hoodie also boasts an embroidered patch of an official Army logo on the front, while an embroidered American flag patch stands out on the left sleeve. Strong demand is expected for this officially licensed U.S. Army apparel, so don’t delay. Order now!