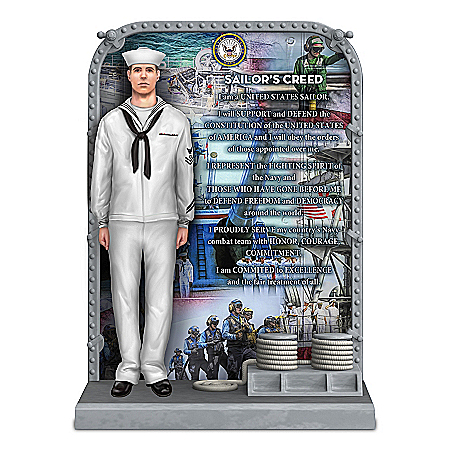 $89.98 U.S. Navy The Sailors Creed Sculpture With Two And Three-Dimensional Symbolic Military Imagery – From the Revolutionary War through World War II, the U.S. Navy® established itself as the most powerful navy in the world – a reputation that holds to this day. Among many of its noble traditions is The Sailor’s Creed. Speaking to the U.S. Navy’s mission, commitment and identity, it is the standard all personnel are expected to learn, recite, and live by each and every day. Now, honor the world’s largest and most capable navy with the U.S. Navy The Sailor’s Creed Sculpture, an officially licensed limited edition only from The Hamilton Collection.Combining dramatic two- and three-dimensional artistry, this handcrafted and hand-painted sculpture features a fully dimensional sailor standing against a backdrop graced with dramatic military artistry and the stirring words of the time-honored Sailor’s Creed. A wonderful way to show your pride in the Navy, this sculpture also makes a thoughtful military gift. Strong demand is expected. Don’t delay, order now!