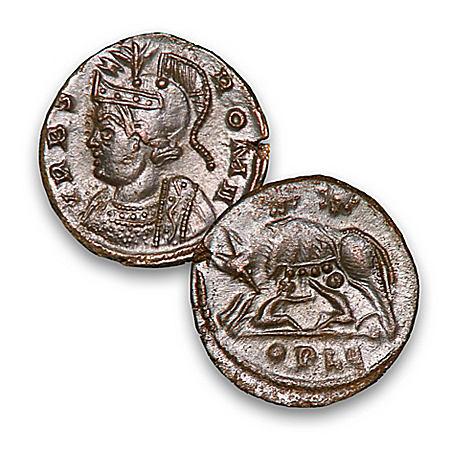 $329.99 The Bronze Follis was a remarkable departure from established Roman coin design. Instead of featuring Emperor Constantine the Great, it reaffirmed Rome’s central role in the empire by portraying the myths of its founding. Now, you have a rare opportunity to own this millennia-old treasure: The Roman Wolf & Twins Ancient Bronze Coin, available in a collector’s presentation ONLY from The Bradford Exchange Mint. Hand-struck over 1,000 years ago to honor the city of Rome around A.D. 332, this distinctive ancient coin is a must for coin collectors and history buffs. And because it was struck by hand, no two coins are exactly alike.The words “VRBS ROMA” (Latin for “City of Rome”) are showcased on the obverse side of this historic coin, along with the city’s helmeted goddess, Roma. The reverse side of the coin captures the famous story of the city’s twin founders, Romulus and Remus, who were nursed by a she-wolf. Certified by the prestigious Numismatic Guaranty Corporation (NGC), your genuine bronze coin arrives sealed within a protective, tamper-proof holder with an NGC logo security hologram, bar code and identification number. Plus, your NGC coin also includes a deluxe display box for an impressive presentation. Don’t miss this coin collecting opportunity. Strong demand is expected, so hurry and order now!