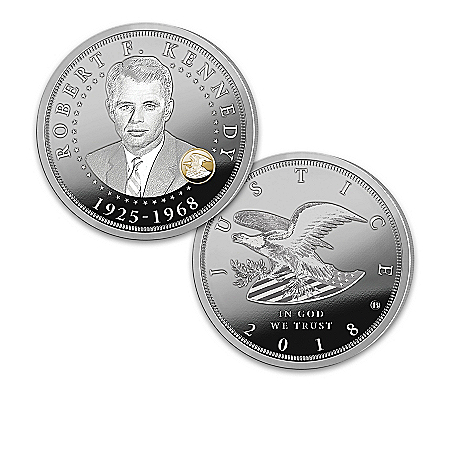 $39.99 In 1968, America was a nation deeply divided. Yet many found hope in the upcoming Presidential election, especially once Senator Robert F. Kennedy was a candidate. Sadly, his journey ended all too soon. Now, honor the 50th anniversary of his passing with The Robert F. Kennedy Legacy Proof Coin Collection, available in an exclusive presentation from The Bradford Exchange Mint. This extraordinary commemorative tribute begins with Issue One, Robert F. Kennedy. Next to arrive will be Issue Two, Display Box and U.S. Attorney General. Soon your collection will continue with Issue Three, Meeting Pope John XXIII, and additional Bobby Kennedy collectible Proof coins, each a separate issue to follow.‡What a powerful way to remember Bobby Kennedy’s dream of uniting all Americans! Intended as collectors’ items, each of the 99.9% silver-plated coins in this collection is offered in coveted Proof-quality condition, with polished, mirror-bright fields and raised, frosted images. The reverse of each coin features artwork honoring Robert F. Kennedy’s historic legacy, highlighted by a golden privy mark honoring the 50th anniversary of his tragic passing. The obverse of each coin bears a detailed American Eagle and a Union Shield with the word “JUSTICE” above. Crystal-clear capsules provide enduring protection for your coins, while the Deluxe Display Box that is included with your collection offers the perfect showcase. Strong demand is expected for this important tribute to Robert F. Kennedy’s life and legacy, so don’t delay. Order now!