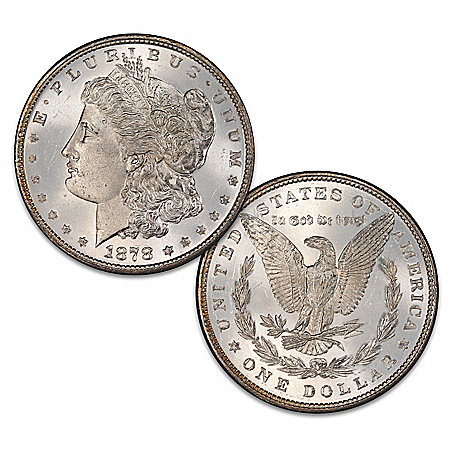 $229.99 The Morgan Silver Dollar was admired as a marvel of perfection, yet the coin’s first year saw a host of changes, errors and modifications during 1878. So many versions of the reverse design were produced that when the final version was agreed upon near the end of 1878, the coin was nicknamed the “Reverse of 1879” to indicate that the design would be used for future years. Only a very small number of these “early-bird” 1878-dated coins were struck before the year ended. But now you can own one with The Rare 1878 Variety Morgan Silver Dollar Coin, an exclusive collector’s presentation available ONLY from The Bradford Exchange Mint. Featuring an 1878 obverse with the reverse of 1879, this genuine, nearly a century-and-a-half-old silver dollar coin is 90% silver and has been hand-selected from what is estimated to be a small fraction of the total 1878 Morgan mintage.The subtle differences that make this U.S. Morgan collectible coin so coveted, such as the rounded breast of the eagle and the slanted arrow feather, can be found on the reverse of the coin and are described in detail on the included FREE collector’s card. Due to its scarcity, the coin is being offered in Very Good (VG) Collector’s Condition and arrives in a crystal-clear, tamper-proof holder. Also included with your coin is a FREE custom wooden Deluxe Display Box and FREE pocket magnifier! Due to government meltdowns, hoarding and the passage of time, it’s estimated that only 17% of all Morgan Silver Dollars ever struck still survive, and since only a fraction of 1878 issues were given 1879 reverses, very few remain available at any price. Therefore, you must act quickly. Don’t miss this rare collecting opportunity; order now!