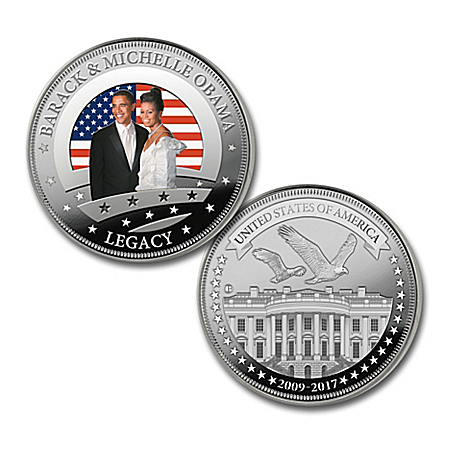 On January 20, 2009, Barack Obama took the oath of office and became the 44th President of the United States, bringing hope to a nation. Now, honor his steady and inspirational leadership with the Barack Obama and Michelle Obama Silver Proof Coin, available in an exclusive presentation from The Bradford Exchange Mint. Measuring a grand 2-1/2 inches in diameter, this silver proof coin is a beautiful tribute to the historic legacy of Barack and Michelle Obama.Minted in one ounce of 99.9% silver in a proof-quality finish, this non-monetary collectible coin showcases a full-color portrait of President Obama and Ms. Obama at one of their many charitable appearances on the front above the word “LEGACY”. The reverse side depicts a pair of American eagles soaring over the White House, the dates of Obama’s two-term presidency, and the year of issue, 2017. This Barack Obama collectible coin arrives secured in a crystal-clear capsule and includes a handsome, piano-finished presentation box. The coin is sure to stir up intense demand, and the coin is available in a limited edition of only 2,017 worldwide, so hurry. Order now!