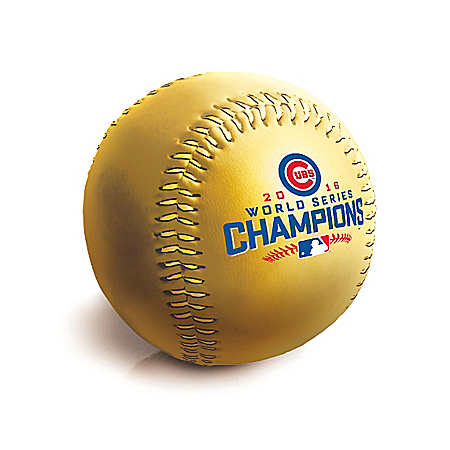 In 2016, after 108 years of wishing, hoping and praying, the Chicago Cubsâ„¢ finally won a World Seriesâ„¢ title! Now you can celebrate this historic win with The Official 2016 World Seriesâ„¢ Championship Baseball Coin, available in a limited edition of only 4,999 coins worldwide only from The Bradford Exchange. This stunning first-ever baseball-shaped coin is a one-of-a-kind commemorative, officially licensed by Major League Baseball Properties.Masterfully minted through an innovative, break-through process, this spherical coin is three-dimensional and richly plated in gleaming 24K gold. The detailed “stitching” on the coin captures the iconic look of a regulation baseball. One side showcases the official Chicago Cubsâ„¢ World Seriesâ„¢ logo in vivid color while the other side shows the frosted imagery of the coat of arms of the Independent State of Samoa, marking this 24K gold-plated coin as official legal tender with the one dollar denomination and minting year, 2017. A historic keepsake for you or a fellow Cubsâ„¢ fan, this MLB collectible arrives in a custom presentation case for gift-giving or display. Strong demand is anticipated, so don’t delay. Order now!