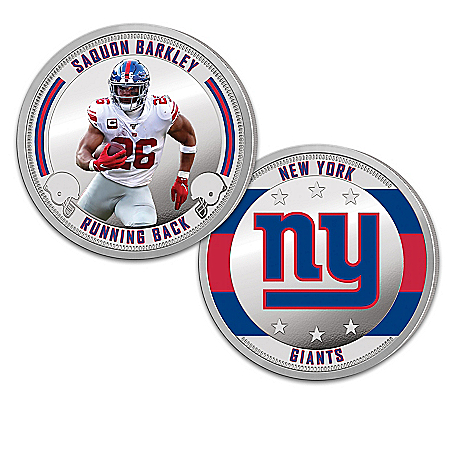 $49.99 The New York Giants 99.9% Silver-Plated NFL Proof Collection Featuring Team Logo & Colors With Secured Crystal-Clear Capsules – New York football is thrilling and the excitement often centers on outstanding franchise running back Saquon Barkley. After joining the Giants in 2018, Saquon Barkley was named AP NFL Offensive Rookie of the Year. He went on to set a franchise record as the only running back to have more than 1,000 yards in their first two seasons. Now, you can honor this breakout star and more iconic players with an exciting collection of commemorative silver-plated Proofs. Introducing The New York Giants Proof Collection, only from The Bradford Exchange Mint. Your collection begins with Issue One, Saquon Barkley. Next to arrive will be Issue Two, New York Giants Logo and Display Box, followed by Issue Three, Daniel Jones and additional NFL collectible Proofs, each a separate issue to follow.�Officially licensed by NFL Properties LLC and National Football League Players, Inc., all of the Proofs in this collection are richly plated in 99.9% silver for long-lasting beauty. The front of each Proof features the team’s official star logo in full color, with a game day image of a key player, such as Saquon Barkley, showcased on the back in vivid color. Proof-finished coining dies create polished, mirror-like fields and raised, frosted imagery for a stunning presentation. Plus, each Proof arrives in a crystal-clear capsule for added protection. A Deluxe Display Box comes with Issue Two, perfect for storing and handsomely showcasing your collection. Strong demand is expected for these New York Giants Proofs, so don’t delay. Order now!