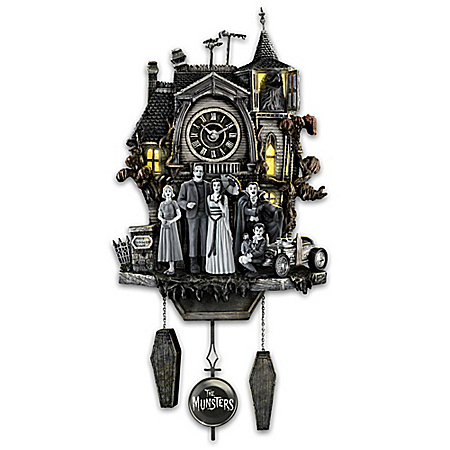 The Munsters® family of misfit monsters never really understood why people thought them to be quite strange. After all, they thought they were perfectly normal. But, time after time, they won the hearts of fans across America as they came into our homes every week to entertain us with their friendly personalities and misadventures. Now, this lovably loony family is celebrated with The Munsters Cuckoo Clock, a limited edition exclusively from The Bradford Exchange. Designed in the shape of the Munsters’ house, this fully sculpted clock is hand-cast and hand-painted in black and white, reminiscent of the beloved television classic. Each darkly enchanting Gothic detail of the Munsters’ mansion at 1313 Mockingbird Lane is captured with fabulously freaky realism.You’ll find all your favorite monsters welcoming you at the doorstep: Herman, Lily, Grandpa, Marilyn, and Eddie with Woof Woof, while Charlie the Raven looks perfectly spooky watching from his tower window. You’ll even find the famous Drag-U-La dragster. Most spooktacular of all, the cuckoo clock plays the show’s theme song and the lights flicker at the top of each hour! Measuring a grand 22 inches high – including the coffin weights and a pendulum that features the show’s logo – it’s an impressively timeless way to remember The Munsters show and a collectible any fan of this freaky family will enjoy time and again. Strong demand is expected. So don’t waste another second; order now!