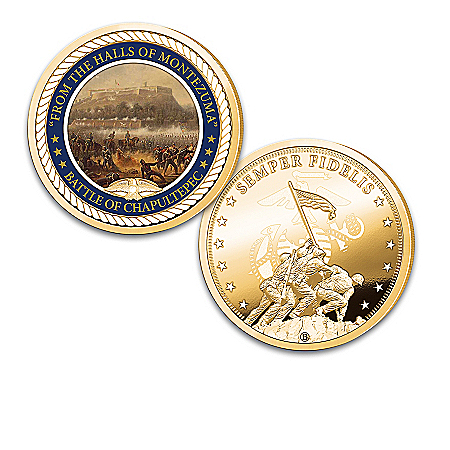 $39.99 The Marines’ Hymn USMC 24K Gold-Plated Proof Collection Salutes The Courage & Commitment Of The USMC – Many of us know at least some of the words to the toe-tapping tune: “From the Halls of Montezuma to the Shores of Tripoli”… yet what do they mean? To members of the United States Marine Corps, the “Marines’ Hymn” means everything. Officially adopted nearly a century ago in 1929, it recalls the history, pride, and commitment of the USMC that still resonates today. Its powerful words and ideals have supported and sustained “The Few” and “The Proud” as they boldly faced menace and mayhem around the globe. Now, this song of resilience and courage has inspired The Marines’ Hymn USMC Proof Collection, available exclusively from The Bradford Exchange Mint. This impressive, officially licensed tribute begins with Issue One, The Halls of Montezuma USMC Proof. Next to arrive will be Issue Two, The Battle of Dema and FREE display box, followed by Issue Three, The Battle of Guadalcanal, and additional 24K gold-plated Proofs, each a separate issue to follow.‡Offered in coveted Proof condition, each of the gleaming commemorative military Proofs in this unique collection is richly plated in 24K gold, and depicts full-color artwork honoring the USMC and inspired by the powerful words and ideals of the famous Marines’ Hymn on the reverse sides. The obverse sides portray World War II U.S. Marines at the famed Iwo Jima flag-raising, plus the Marine emblem and the motto Semper Fidelis. Proof-quality coining dies create each Proof’s polished, mirror-like fields and raised, frosted images. Your Proofs arrive in crystal-clear capsules for heirloom preservation, and the handsome FREE display box offers the perfect way to showcase your collection – and your American pride. Strong demand is anticipated for this USMC collectible tribute and patriotic gift, so don’t wait. Order now!