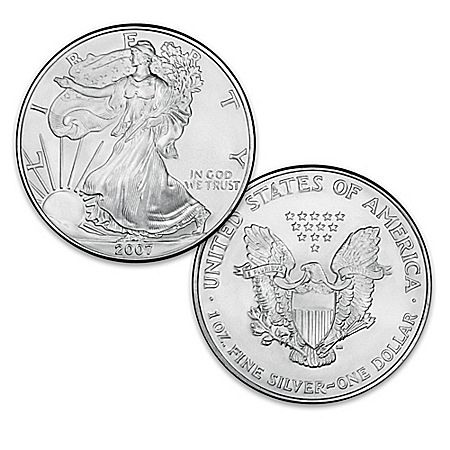 $199 Mintage of the American Eagle Silver Dollar began in 1986. Then after 21 years with the same design, experts noticed something different about the 2008 issue. The lettering had changed slightly on the reverse, a serif appeared on the “U” and the angular dash became curved. These small differences made the 2007 issue the last-ever American Eagle Silver Dollar with the original design. Now, this increasingly coveted coin can be yours with The Last-Ever Original Silver Eagle Dollar Coin, available from The Bradford Exchange Mint. This 2007 Silver Eagle collectible coin is minted in one Troy ounce of 99.9% pure silver and bears the original lettering style and design: the “U” in “United” has no lower serif and displays the original angular dash between “silver” and “one.”Minted before the dies went digital, this scarce coin features the acclaimed Walking Liberty design on the obverse and a powerful bald eagle shield on the reverse. Your coveted original-design bullion coin arrives in a crystal-clear, tamper-proof holder to preserve its beauty for years to come. Included is a handsome, museum-quality wooden Deluxe Display Box along with a FREE Collectors’ Card showcasing detail about the coin and a FREE pocket magnifier to help you view your coin’s distinctive differences. Given that the 2007 mintage makes up just 2% of all American Eagle Silver Dollars ever struck, strong demand is anticipated. Therefore, to avoid disappointment, you are urged to order now!