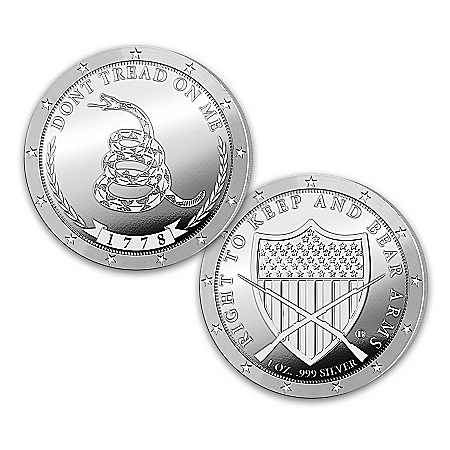 $149 Before our young nation adopted the Stars and Stripes, Revolutionary War America showed its defiance and independence with a banner emblazoned with a deadly coiled rattlesnake plus the warning: “DON’T TREAD ON ME”. More recently, it has been used as a symbol of patriotism, to express criticism of the government and to support civil liberties and rights, especially the Second Amendment. Now you can honor that revolutionary spirit and the rights we hold dear with The Gadsden Flag 2nd Amendment 1 Oz. Proof Coin, available only from The Bradford Exchange Mint. This unique collecting opportunity is a must for coin aficionados and history buffs, capturing one of the most iconic Revolutionary War images on a Proof-condition silver coin.Intended as a collector’s item and minted in one full ounce of 99.9% pure silver, this distinctive commemorative Proof portrays the Gadsden Flag’s instantly recognizable coiled rattlesnake on the obverse side, accented with “DONT TREAD ON ME”, the date 1778 (honoring the year of the symbol’s adoption) and 13 stars to recall the 13 Original Colonies. The 13 stars are repeated on the reverse side, along with a weapons-crossed Union shield and the words “RIGHT TO KEEP AND BEAR ARMS”, from the Second Amendment. Proof-quality coining dies create raised, frosted details and mirror-polished fields to accentuate the quality, artistry and symbolism of this shining tribute. Plus, it arrives secured in a crystal-clear tamper-proof holder with a handsome custom display box to show off your treasure. Strong demand is anticipated for The Gadsden Flag Proof coin, and it makes an impressive patriotic gift too, so don’t wait. Order now!