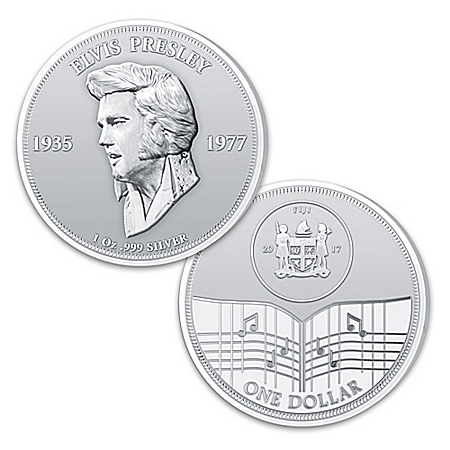 He was just an ordinary boy from Tupelo, Mississippi. Then, for his eleventh birthday, young Elvis Presley™ received a guitar – and the rest is history. A natural-born showman, Elvis connected with his audience, shook up the music industry and became the undisputed King of Rock ‘N’ Roll™. Now, mark the 40th anniversary of this beloved star’s passing with the Elvis Presley 40th Anniversary One Ounce Silver Dollar Coin, an exclusive design strictly limited to 1,977 coins worldwide, available only from The Bradford Exchange Mint.Containing one full ounce of 99.9% fine silver, the obverse of this official legal tender silver dollar coin features the Coat of Arms of the issuing government, Fiji. Below, it recalls the ornate Gates of Graceland™ at the home of Elvis Presley, where fans gather to celebrate his legacy. The reverse showcases a dramatic bust of Elvis in detailed bas-relief along with the dates of Elvis’ lifespan. Truly fit for The King™, this silver dollar is minted with a rarely seen Reverse Proof finish. A distinctive way to mark significant historical events, these coins use specially prepared coining dies to create dramatic mirror-like raised imagery. This Elvis Presley collectible coin arrives secured in a crystal-clear capsule for heirloom safe-keeping. Strong demand is expected, so don’t wait. Order now!