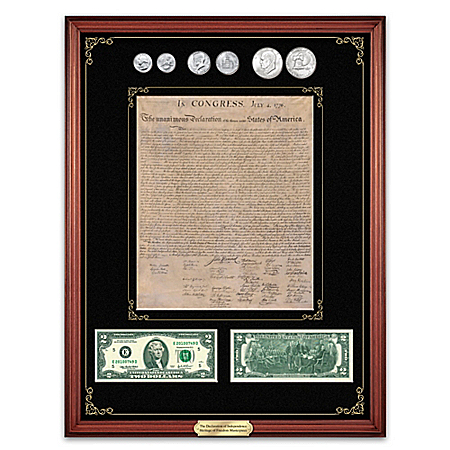 $179.99 In the summer of 1776, representatives of the 13 original colonies met in Philadelphia. Determined to face the most formidable military power on earth, these American patriots placed their signatures on the U.S. Declaration of Independence, changing history. Two hundred years later, the nation that resulted from their actions marked its Bicentennial. In celebration, special dual-dated coins and $2 Bills were issued. Now, give tribute to our nation’s freedom with the Declaration of Independence Heritage of Freedom Currency Set, a unique nine-collectibles-in-one set exclusively from The Bradford Exchange Mint.Your collectible currency set is the perfect symbol of your American pride, showcasing an heirloom-quality reproduction of the Declaration of Independence on parchment-hued paper. Two each of the dual-dated (1776-1976) Bicentennial Coins – Quarters, Half Dollars, and Dollars in Brilliant Uncirculated condition – will also arrive with your set, as well as two genuine, iconic Bicentennial $2 Bills in crisp, uncirculated condition. Plus, your American collectible treasure arrives professionally secured and matted within a museum-quality, mahogany finished wooden frame with protective glass. Strong demand is expected, so order now!