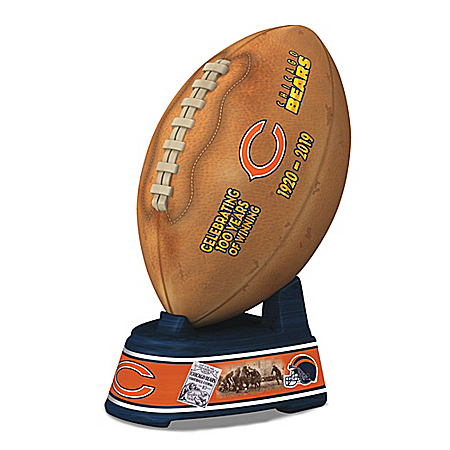 $99.99 The Chicago Bears 100th Anniversary NFL Football Sculpture Featuring Team Logo, Colors & Images Celebrating The Teams Century Long Tradition Of Success – Here’s to 100 years of Chicago football excitement! Not only is the Chicago franchise one of only two charter members of the National Football League still in existence today, it is also one of the most successful, winning the very first NFL Championship Game back in 1933. Whats more, Chicago has more representatives in the Pro Football Hall of Fame than any other NFL franchise. Now, celebrate 100 years of the “Pride & Joy of Illinois” with this limited-edition Chicago Bears 100th Anniversary Football Sculpture, a first-ever available only from The Hamilton Collection.Officially licensed by NFL Properties LLC and National Football League Players Inc., this NFL collectible honors a history that includes eight world championships, plus a Super Bowl victory. The vintage-looking football sculpture and its tee boast the famous navy blue and burnt orange colors and are emblazoned with team logos, vintage graphics, a brief team history and more. The Super Bowl logo plus the years of every world championship are displayed on the sculptured football in a bold testament to a century-long tradition of success. It’s a must-own treasure for Chicago football fans and makes a great NFL gift but strong demand is expected. Don’t wait – order now!