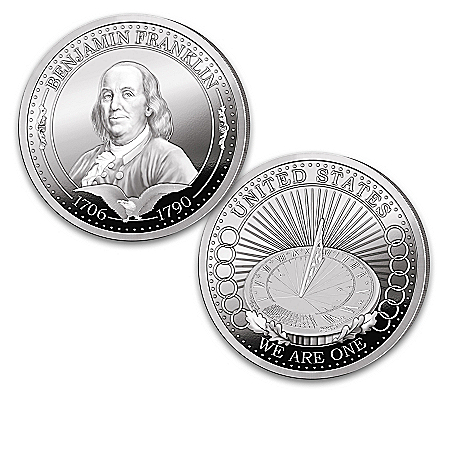 $49.99 The Benjamin Franklin Legacy 99.9% Silver-Plated Proof Coin Collection Featuring The Extraordinary Innovations And Achievements Of The Founding Father – If any one person could represent the boundless possibilities of America, it would be Founding Father Ben Franklin. This writer, inventor, innovator, scientist, diplomat and businessman helped invent a whole new kind of government. He signed the Declaration of Independence, the Treaty of Alliance with France, the Treaty of Paris and the Constitution. While Franklin’s image is a familiar sight on the $100 bill and the last circulating silver half dollar series, few realize he also designed our nation’s first circulating coin. Now, you can pay tribute to his fascinating life, extraordinary innovations and achievements with our commemorative Proof coins. Presenting The Benjamin Franklin Legacy Proof Coin Collection, available exclusively from The Bradford Exchange Mint. This collection begins with Issue One, The Benjamin Franklin Proof Coin. Soon, your collection will continue with Issue Two, Poor Richard’s Almanac and Display Box followed by Issue Three, Lightning Rod Experiment and additional Proof coins honoring Benjamin Franklin and his accomplishments, each a separate issue to follow.?Each Proof coin in this collection is richly plated in 99.9% silver. The coveted Proof quality coining dies create its mirror-like fields and raised, frosted imagery. Each coin collectible tribute pays respect to this Founding Father of American coins with unique, original design. The front of Issue One features a portrait of Ben Franklin, while the back is inspired by the 1787 Fugio or Franklin Cent. This now rare coin was called Fugio (Latin for flee or fly) referring to the image of a sundial, a symbol of time flying by. The 13-link chain plus the words “WE ARE ONE” symbolize the 13 Original Colonies standing united. Each Proof coin arrives sealed for posterity in a crystal-clear capsule. This collection is complete with a h