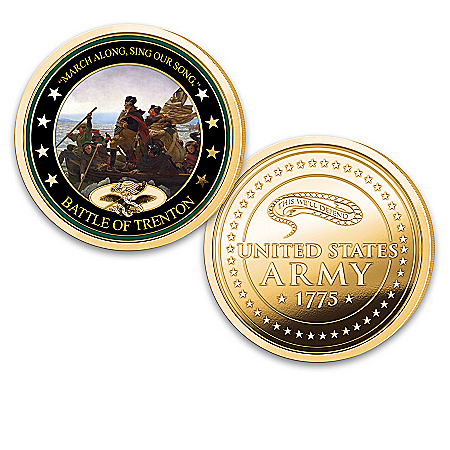 $49.99 The Army Goes Rolling Along 24K Gold-Plated Proof Coin Collection With Art Of The Battles Of Trenton, Baltimore, Molino Del Rey, Gettysburg, And More – Since 1775 and the Revolutionary War, the U.S. Army has faithfully defended our freedom. Yet, it wasn t until 1956 that the U.S. Army adopted its own official song, “The Army Goes Rolling Along.” With stirring references to famous battles and its timeless cadence, the official song expressed the Army s undaunted spirit that still resonates today. Now, salute the enduring courage, steely resilience, and unwavering dedication of the U.S. Army and this iconic song with The Army Goes Rolling Along Proof Coin Collection, available exclusively from The Bradford Exchange Mint. Beginning with Issue One, Battle of Trenton, soon your collection will continue with Issue Two, Battle of Baltimore and FREE deluxe display box, followed by Issue Three, Battle of Molino Del Rey and additional collectible Army tribute Proof coins, each a separate issue to follow. Officially licensed by the U.S. Army, each commemorative Proof coin in this collection is richly plated in gleaming 24K gold and offered in coveted Proof condition. Honoring the proud history and heritage of the Army, they feature unique printed images of different Army battles on the front side, along with excerpts from the Army Song; the last coin in this collection will feature the U.S. Army Seal. The back sides feature the Army motto, “THIS WE’LL DEFEND”, and the year of the Army’s founding, 1775. Proof-quality coining dies create the polished, mirror-like fields and raised, frosted images. Each arrives secured in a crystal-clear capsule for heirloom preservation, so you can treasure them for years to come or give them as a patriotic gift. Plus, the FREE deluxe display box, arriving with Issue Two, provides the perfect showcase for this Army tribute Proof coin collection. Strong demand is anticipated, so don’t miss this chance. Order now!