The 75th Anniversary of Victory in WWII 1 Oz. Silver Proof 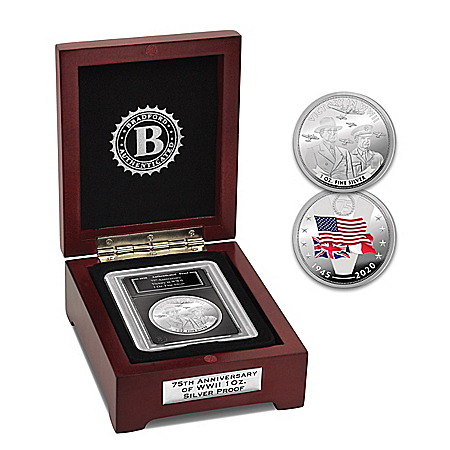 The 75th Anniversary of Victory in WWII 1 Oz. Silver Proof

$199.99 The 75th Anniversary Of Victory In WWII 1 Oz. 99.9% Silver Proof Featuring President Harry S. Truman & General Dwight D. Eisenhower Portrayed On The Reverse & Comes With A Deluxe Display Box – Over 75 years ago, after over four long years of heartbreak and heroism, the Allies achieved victory in World War II. Thanks to the courage and dedication of “The Greatest Generation,” the most extensive and horrific war the world had ever seen was finally over. No more would the Axis Powers of Italy, Germany, and Japan threaten our citizens, our friends, or our greatest treasure: our freedom. Millions rejoiced and looked forward to a shining future brimming with new possibilities. Now you can own a gleaming salute to this milestone 75th anniversary and enjoy the opportunity to share a patriotic gift worthy of that pivotal moment in history. Introducing The 75th Anniversary of Victory in WWII Silver Proof, available in an exclusive presentation from The Bradford Exchange Mint.Featuring 1 full ounce of 99.9% silver, this gleaming Proof tribute is expertly minted with Proof-quality coining dies to create its superb, Proof-struck finish. The reverse showcases a detailed double portrait of President Harry S. Truman with General Dwight D. Eisenhower saluted by a flight of warplanes above. A banner on the bottom bears the words “1 OZ. FINE SILVER” while the top states VICTORY IN WWII. The obverse celebrates our brothers-in-arms, the Allied nations, with the flags of the United States, Great Britain, and France selectively printed in vivid full color. A “V” for victory, and a special 75th Anniversary mark add to this thrilling commemoration. It arrives secured in a crystal-clear, tamper-proof holder to preserve it for years to come, and a deluxe display box provides the perfect showcase for your coin. Strong demand is expected. Order now!