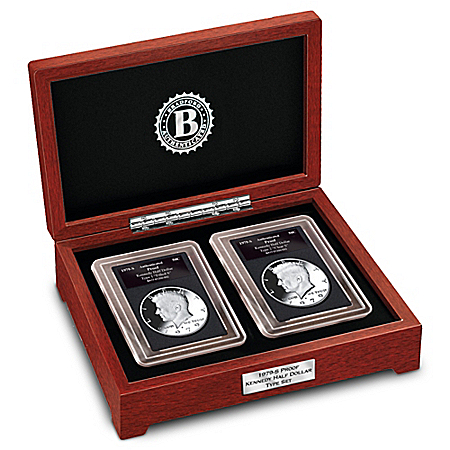 $129 Modern U.S. Mint proof coins are expected to be shining paragons of perfection and that’s certainly true for the 1979-S Proof Kennedy Half Dollar. Yet, it was soon noticed that this coin came with an unexpected problem. Now, this 1979-S variety Kennedy Half Dollar coin set lets you own this piece of rare coinage history in a presentation exclusively from The Bradford Exchange Mint. Offered in superb Proof condition, this distinctive collectible coin set includes 2 Kennedy Half Dollars: Type 1, the “error” coin with filled-in “S” mintmark from the San Francisco Mint and Type 2, the ultra-rare corrected coin featuring the crisp, clear “S” and making up just 11% of all 1979-S Kennedy Half Dollars.This historic half dollar coin set featuring both varieties of the 1979-S Kennedy is rarely offered and is sure to be a must-have for collectors. Each coin arrives secured in a crystal-clear, tamper-proof holder with an official holographic seal and bar code to affirm its authenticity and to preserve its beauty for years to come. Both of the coins fit perfectly in the included deluxe display box. Plus, this set includes a FREE Collectors’ Card with details about your coins’ variations and how to find the differences, and you will also receive a FREE pocket magnifier to spot the differences for yourself. Strong demand is expected, so act quickly to own The 1979-S Variety Kennedy Half Dollar Type Coin Set. Order now!