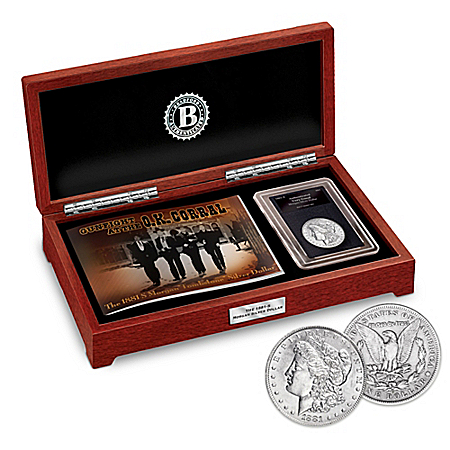 $189 Bring home the silver spirit of the Wild West with The 1881-S Morgan Tombstone Silver Dollar Coin, showcased in this exclusive presentation from The Bradford Exchange Mint. Capturing the rugged reputation of Tombstone Arizona, this silver dollar coin was struck in the same year as the town’s infamous “Gunfight at the O.K. Corral.” This showdown pitted the Earp brothers – Wyatt, Virgil and Morgan – and their friend Doc Holliday against the Clanton and McLaury Gang. The shootout ended in three men sent to Boot Hill, and inspired a Western legend.Struck in 90% silver at the West’s San Francisco Mint, this S Morgan Silver Dollar is the right age and mintage for Wyatt Earp and his posse to have recovered from outlaws or used in a friendly poker game. Its obverse features the year 1881, and the reverse showcases the “S” mintmark of the San Francisco Mint. Your 90% silver coin arrives secured in a crystal-clear tamper-proof holder and comes with a handsome mahogany-finished wooden Deluxe Display Box with a gleaming title plaque. Plus, you’ll receive a fascinating custom booklet about the Gunfight at O.K. Corral. Strong demand is expected for this exclusive presentation of The 1881-S Morgan Tombstone Silver Dollar Coin, so do not delay. Order now!