The 100th Anniversary of the US in WWI Silver Plated Coin Collection: 1 of 2000 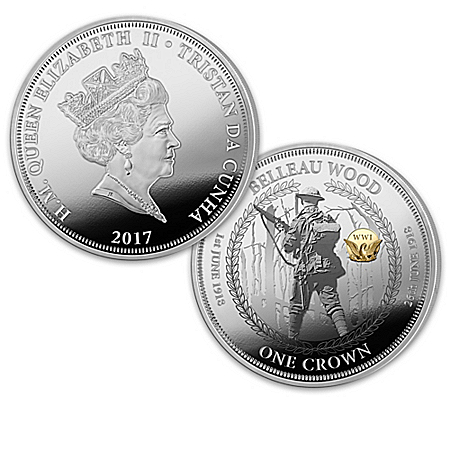 The 100th Anniversary of the US in WWI Silver Plated Coin Collection: 1 of 2000

$44.95 The 100th Anniversary Of U.S. In WWI Legal Tender Silver-Plated Coin Collection – A century ago the Great War raged and lethal innovations in war craft led to a staggering loss of life. In 1917, the U.S. joined the fray, and U.S. Marines were deployed “over there” to help “make the world safe for democracy.” Now, celebrate their bravery and sacrifices with this The 100th Anniversary of U.S. in WWI Coin Collection, a limited-edition presentation exclusively from The Bradford Exchange Mint. This shining tribute begins with Issue One, The 100th Anniversary of U.S. in WWI Silver Crown. Soon, your collection will continue with Issue Two and additional collectible WWI 100th anniversary coins, each a separate issue to follow.‡valor of the U.S. Marine Corps, while the reverse sides feature Her Majesty Queen Elizabeth II, marking each coin as official legal tender issued by the Territory of Tristan da Cunha, plus the one-crown denomination and the year of mintage. Struck in prized Proof condition, each coin arrives sealed in a crystal-clear capsule and the collection includes a mahogany-finished deluxe display box. Don’t miss your chance to own this spectacular WWI collectible commemorative silver-plated coin collection – it is available in an edition limited to 2,000 complete collections, and strong demand is expected. Hurry, order now!