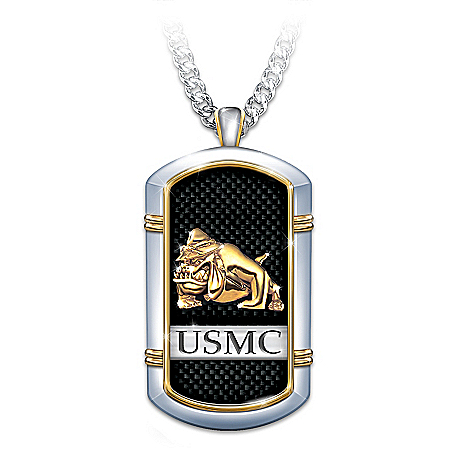 $99.99 According to USMC legend, the term “Devil Dog” is a very common nickname for Marines of any age. The term was first used by German soldiers to describe U.S. Marines who fought in the Battle of Belleau Wood in 1918. The Marines fought with such ferocity that they were described as “Dogs from Hell.” Now you can continue to celebrate the heroic tale of the Devil Dogs with the Strength of the USMC Pendant Necklace, a fine jewelry exclusive from The Bradford Exchange. Officially licensed by the United States Marine Corps and crafted in solid stainless steel, this patriotic jewelry is sure to become a treasured keepsake.This expertly crafted men’s stainless steel dog tag features a bold and original design honoring the famous USMC mascot. A sculpted bulldog is ion-plated in 24K gold and rests on top of a black carbon fiber inlay, the same high strength, low weight material used in high performance military vehicles and equipment. More 24K-gold ion plating accents the front edges and the dog tag’s bail. Under the bulldog is a banner etched with “USMC.” Etched on the reverse is “SEMPER FI,” “Honor Courage Commitment,” the USMC emblem and “Ooh-Rah!” Your USMC jewelry arrives in a velvet jewelry pouch and gift box. Strong demand is expected, so don’t wait, order now!