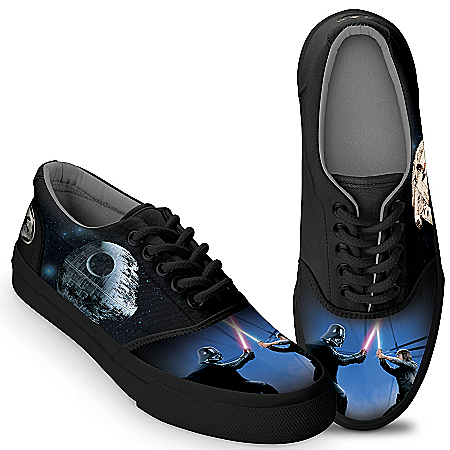 $89.95 STAR WARS Saga Men’s Shoes Featuring A Black Canvas With Luke Skywalker & Darth Vader, Accented By The Millennium Falcon & Death Star – May the force be with you! Wherever you go, you can channel your inner Jedi or Sith when you wear these officially licensed men’s STAR WARS™ shoes. No matter where your allegiance lies, you’re sure to love the dual designs featuring scenes from the wildly popular film series. Introducing the STAR WARS Saga Men’s Shoes, a custom apparel design available only from The Bradford Exchange. Perfect for pairing with your STAR WARS apparel, these men’s black shoes are out of this world.These distinctive shoes feature black canvas uppers, the ideal backdrop for the epic lightsaber battle scene between Luke Skywalker and Darth Vader. The sides boast the Death Star on one shoe and the Millennium Falcon on the other, each highlighted by silver symbols from the Rebel Alliance and the Galactic Empire on the heels. Rubber soles and foam insoles provide wear-anywhere comfort, making these shoes a great addition to any STAR WARS fan’s collection. What a stylish tribute to the greatest film series in the galaxy! Strong demand is expected, so don’t delay. Order now!