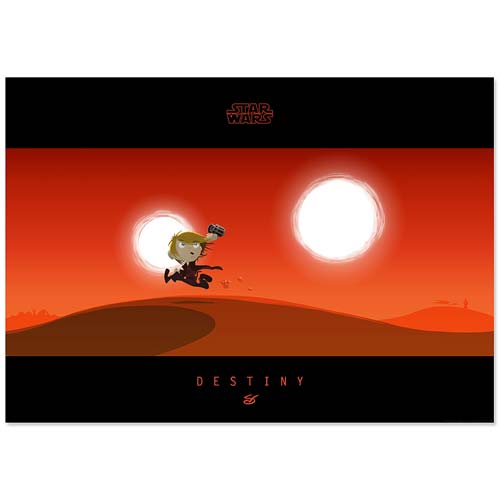 $89.99
Amazing giclee art print based off of the Star Wars universe! Image features little Anakin Skywalker playing with a toy TIE Fighter as a child. A limited edition of 150 hand-numbered pieces! Sometimes, you can look at a child and catch a glimpse of that child’s future. Looking at this Star Wars Little Vader’s Destiny Paper Giclee Print, who would have known that the small slave boy playing fighter pilot with a toy TIE Fighter on one Tatooine afternoon was going to grow up to bring rise to the Galactic Empire and cause the downfall of the old Republic? This fantastic giclee features a wonderful and whimsical image of young Anakin Skywalker as he plays alone with a toy TIE Fighter all around the Tatooine landscape. This great giclee has been printed on paper and features the Star Wars logo along with the solitary yet significant word, “Destiny.” Along with being a limited edition of 150 pieces, this fantastic giclee has been hand-numbered and measures 19-inches wide x 13-inches tall. Giclee (pronounced “zhe
ACME Archives
Star Wars Little Vader’s Destiny Paper Giclee Print
EntertainmentEarth.com