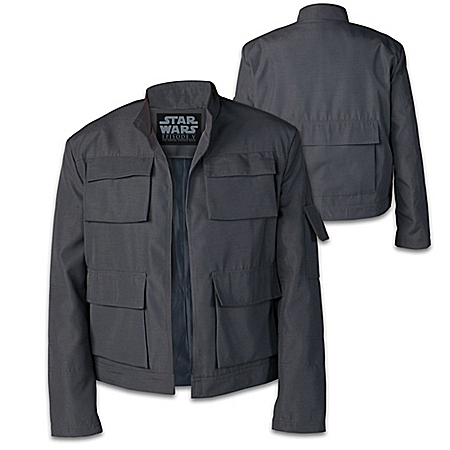 $149.95 STAR WARS Han Solo Inspired Men’s Galactic Gray Jacket Featuring Episodic Title Patch – Han Solo™ swaggered his way through “Star Wars: The Empire Strikes Back™,” fighting to save the galaxy from Darth Vader while winning the heart of a princess. Now, our STAR WARS™ jacket inspired by Han Solo can help you channel his cool, confident, fighter pilot style. Introducing the STAR WARS Han Solo Men’s Jacket, an officially licensed apparel design available only from The Bradford Exchange. If youve ever wondered what its like to pilot the Millennium Falcon™ through battle, this STAR WARS clothing is for you!Inspired by the one our hero wore in “Star Wars: The Empire Strikes Back,” this Han Solo jacket is expertly crafted of durable woven twill in a rugged shade of galactic grey. The jacket features a zipper in the front and six pockets, including four flap pockets on the front, a roomy cargo pocket on the back and a convenient small pocket on the left sleeve. Plus, you’re sure to feel like you’re ready to join the Rebel Alliance with the iconic STAR WARS episodic title patch feature on the inside. This legendary men’s jacket is perfect for fans across the galaxy and strong demand is expected, so don’t wait! Use the force to bring home this Han Solo-inspired clothing before it disappears into the dark side. Order now!