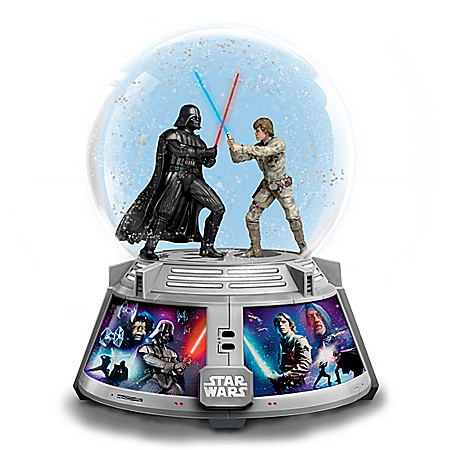 $89.99 It’s the ultimate showdown between good and evil: Luke Skywalker™ vs. Darth Vader™! Featuring the climatic reveal that Darth Vader is Luke Skywalker’s father, the famous scene from “The Empire Strikes Back” represents a watershed moment for STAR WARS™ fans and one of the most dramatic battles in the STAR WARS movie franchise. Now the STAR WARS Forces of Light & Dark illuminated glitter globe brings this epic duel to life with lights, sound and swirling glitter, available in a limited edition only from The Bradford Exchange.Handcrafted, fully-sculpted Darth Vader and Luke Skywalker figures recreate their famous lightsaber battle, with the Rebel and Empire icons underfoot within this magical STAR WARS collectible glitter globe. The sculptural base features full-color artwork from “The Empire Strikes Back” and a STAR WARS logo plaque. With a gentle shake, sparkling silvery glitter swirls around the glass globe and the globe plays the STAR WARS theme song. Best of all, red and blue LEDs light up the iconic battle between the Light and Dark Sides. It is a MUST HAVE for fans of the iconic movie franchise, so don’t miss out on this collectible STAR WARS Forces of Light & Dark Glitter Globe! Order now!