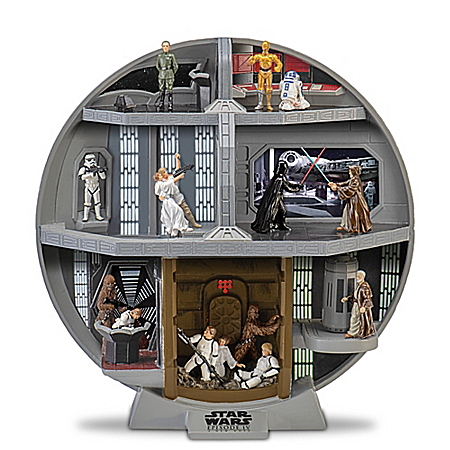 $179.99 STAR WARS: A New Hope Death Star Diorama Sculpture Has 7 Scenes From The Classic Movie And 15 Hand-Painted Character Figures – In a single blast, the dangerous Death Star™ can harness enough power to destroy an entire planet! This massive technological terror and symbol of the Galactic Empire™ put some of your favorite STAR WARS™ heroes in immediate peril. Now, you can relive the iconic moments that led up to the victorious destruction of the Death Star and the defeat of Grand Moff Tarkin™ and Darth Vader&#153 with the STAR WARS: A New Hope Sculpture, a limited-edition diorama available only from The Bradford Exchange. This officially licensed STAR WARS collectible is masterfully crafted as an out of this world, three-dimensional Death Star sculpture that pays homage to the action-packed battles.Inspired by the infamous Death Star, this meticulously detailed diorama features 7 depictions of classic scenes from STAR WARS: A New Hope. Fifteen hand-painted character figures are placed in each scene to bring this treacherous space station to life. On the reserve side, the exterior of the Death Star is displayed with intricate detailing and amazing texture that is sure to transport your imagination back to the beloved STAR WARS galaxy. With memorable scenes such as Obi-Wan disabling the tractor beam holding the Millennium Falcon to Leia and Luke swinging across the chasm under fire, this 3D keepsake is also an absolute must-have STAR WARS gift for dedicated fans. Demand is expected to be high with the edition limited to only 10,000 worldwide, so don’t delay; order now!