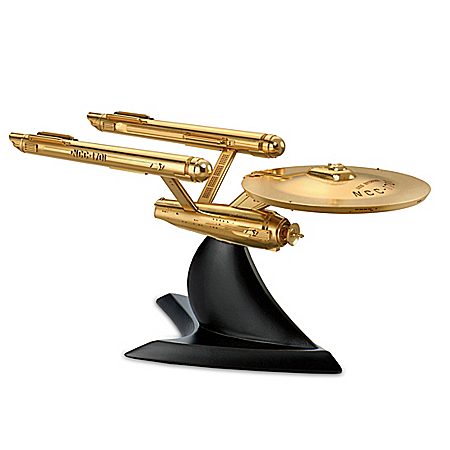 $89.99 STAR TREK U.S.S. Enterprise NCC-1701 Sculpture Featuring A Bright Golden Finish & Sleek Black Base That Is Shaped Like The Starfleet Command Insignia – When STAR TREK™ first aired on September 8, 1966, one thing was instantly clear: this series was not like other TV shows. In addition to charismatic characters and intergalactic adventures, the series introduced us to one of the most iconic spaceship designs in history. The U.S.S. Enterprise NCC-1701 Sculpture recreates the incredible detail of that design in a limited-edition tribute available only from The Bradford Exchange. Officially licensed by CBS Studios, Inc., this impressive STAR TREK collectible brings this ground-breaking spaceship – now hailed as a “living cultural object” – to life in your home. Because it followed actual aircraft engineering principles, the original U.S.S. Enterprise design has a reputation for influencing real-life space travel. That profound influence is fully on display in this incredible recreation, from its saucer-shaped command decks to its graceful wing-like engine nacelles. Expertly crafted of cast metal, it is intricately detailed to highlight each feature and gilded with a gleaming golden finish to indicate its importance. Plus, the sleek black base is shaped like the Starfleet Command insignia to provoke even more sci-fi nostalgia and complement your STAR TREK decor. Strong demand is anticipated, so don’t wait. Order now!